Django On The Move: Perseverance helps bring kitty back to loved ones.

As 2015 comes to a close, we wanted to share a positive story from this year.  This is the story of Django, a sweet little kitty who was brought into our hospital when he was only a few days old, nursed back to health by our doctors and staff, and adopted by one of our former Client Care Specialists, Emily.

In late September, frisky Django escaped from his home by knocking out a window screen. He then spent almost six weeks touring Loudoun County – braving the weather, risking his life around wildlife and lots of traffic, and making his mother a nervous wreck!  Thanks to Django’s loving and determined owners, Django luckily made it back home.

One of the easiest things you can do as an owner to keep your pets safe is to get them microchipped.  Microchipping is the only permanent and most effective form of identification if your pet should ever go missing.  We recommend HomeAgain Microchips for all of our patients.  To learn about microchipping and HomeAgain, read our article here.

My greatest treasure is an eight pound cat with stumpy little legs and a freckle on his nose. He is the naughtiest, most entertaining, endlessly affectionate cat I have ever known, and we have been absolutely inseparable since he came into my life at two weeks old. His name is Django, and he is the light of my life. 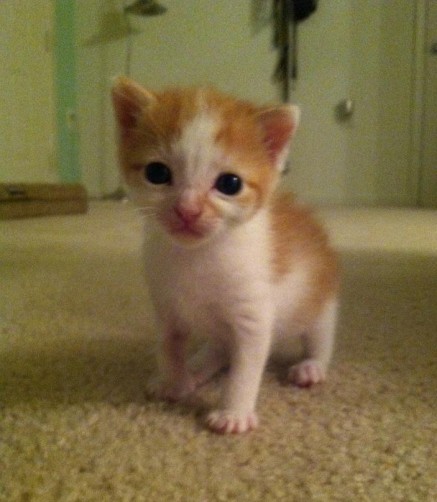 On Saturday, September 26, my boyfriend and I had plans to spend the day at a craft festival. As we got ready to leave for the day, a strange propane smell I’d been noticing in my apartment was back.  Trying to err on the side of caution, I cracked a few windows in the apartment to allow for ventilation. One of those windows was in the bedroom where Django was to be confined for the day. I shut Django in the bedroom, kissed him on the nose, and headed out. I had no idea it could easily have been the last time I ever saw him.

When we got home from the festival that night, I opened the door to the bedroom, expecting to hear the familiar jingle of my little cat’s collar. I was instead greeted by silence. I called Django’s name and looked under the bed, but still could not find him. I lifted all of the pillows, shook out the covers, and opened my closet, wondering if I had somehow managed to shut him in there. And then I heard the faint flapping nose coming from the open window. I raced over to the window to find that the screen had come completely out of the frame, and realized that my worst fear was confirmed: Django was gone. I scrambled to put my shoes back on, my heart slamming in my chest. I immediately called my family and nearest friends, begging them to come help us search- we needed to cover as much ground as possible. I stayed out the entire night searching, only stopping to try to nap for an hour when the sun came up. It was the beginning of a five and a half week mission to bring our baby home.

The first few days were a blur.  All I did was search for Django, try to get through my work day, and cry. Despite the crippling anxiety and sadness brought on by Django’s disappearance, we knew that the worst thing we could do was sit still. My boyfriend and I launched a plan to get the word out to as many people as possible. We printed flyers with a photo of Django and our contact information, and put one on every door in our apartment complex (much to the displeasure of our landlord). We pulled up the manhole covers on every storm drain in our neighborhood, and climbed down into the damp tunnels, hoping to catch a glimpse of him. We called the Loudoun County Animal Shelter and filed a lost pet report, posted our information on numerous lost pet groups on Facebook and Craigslist, called Home Again to make sure that all of our contact information was still up to date on Django’s microchip, and we drove to every single veterinary hospital in Ashburn, Leesburg, and Sterling to hand out flyers. We set a litter box, food, and a couple of our t-shirts outside of our front door in the hopes that Django would recognize the smells and find his way home.

A few days into the search, we were able to hire a professional tracking dog. The golden retriever worked her way all through our apartment complex, stopping every so often to indicate where Django had left a strong scent. The dog found that Django had been traveling from building to building, up the stairs to the second floor, trying to find us. It was utterly heartbreaking to watch the path unfold. Towards the end of the trail, the dog signaled to her handler that she was smelling fear in Django’s tracks. The handler grew quiet as she followed the dog across a busy road- the dog stopped suddenly on the other side. “It appears as though Django was being chased by something- and the tracks stop here,” the handler said softly. A million different scenarios raced through our heads. Had he been killed by a fox? Hit by a car? Picked up and driven away by a good Samaritan? The next day, we called VDOT to find out if anyone had picked up Django’s body- a call we would make every few days over the next several weeks.

In order to broaden our search, we had extra-large signs printed up, and we nailed them to stop signs and trees in the surrounding neighborhoods. We utilized the Find Toto calling service, which placed automated calls to 500 of our closest neighbors to alert them of our missing pet. We searched through the woods behind our apartment several times a day, knowing that most indoor cats who run away are typically hiding only a couple hundred yards from their homes. In the woods, we set up feeding stations with wildlife cameras, hoping to catch a glimpse of Django on the screen. Our second, more direct approach was to set four humane traps throughout the woods- unfortunately, due to fear and misunderstanding, two of our traps were sabotaged by angry neighbors. In our remaining two traps, we caught seven raccoons, three possums, and two very annoyed skunks- still cute, but not who we were looking for. Every night for the first couple of weeks, we camped out behind a local restaurant where a group of feral cats came to be fed; the possibility existed that Django could have gravitated towards the cat colony.

As the weeks progressed, we started to feel very defeated. Phone calls with potential sightings trickled in every couple of days, but every lead we followed ended up being a Django lookalike. Still, we were encouraged by the outpouring of support by friends, neighbors, and even complete strangers. We were lucky enough to cross paths with a couple of wonderful individuals who took it upon themselves to make copies of our flyers and distribute them in their neighborhoods. We even received calls from a few sweet children who spent their after school hours riding their bikes around, looking for our dear Django.

Our last shreds of hope quickly began to fade as November approached. There had been several nights with freezing temperatures already, and many days of heavy rainstorms and winds. We knew the chances of Django surviving the elements, the predators, and the traffic were incredibly slim. We began to accept the painful reality that we would likely never see our little cat again.

On November 2nd, I was sitting at my desk at work, trying to keep my mind occupied with projects. When my phone rang, I didn’t think much of it- I assumed it was another misleading sighting. As I was checking my voicemail, I heard a text message come through. I paused to look at the screen, and my heart stopped. Right in front of my eyes was a photo of a woman holding a very skinny, dirty, frightened Django. “Is this your cat?” she asked. I immediately replied that yes, I believed it was, and to please keep him locked up in a room until I could get there. My heart raced as I slammed my laptop shut and ran to my car. I swung by the apartment to pick up my boyfriend, and we drove to the good Samaritan’s house.  As we pulled into her driveway, I saw a dog crate in the garage with a cat huddled in the corner. I parked the car, ran over to the crate, and burst into tears. There he was- my sweet little boy. The woman explained to me that she had seen our signs around town, and when she saw Django walking through the woods behind her house, she was able to find one of my Facebook postings in a lost pet’s group and locate my phone number. She coaxed Django into her garage with some food, and luckily thought quickly enough to secure him in a crate. We thanked her profusely, and immediately drove Django to Leesburg Vet for a thorough exam and treatments. Django’s exam with Dr. Boyle revealed that he had lost almost a third of his bodyweight, the tips of his ears were frostbitten, and he had ulcers on his paw pads. He required subcutaneous fluids, antibiotics, a full blood work panel, and a very careful feeding plan, but overall he was in surprisingly good shape. 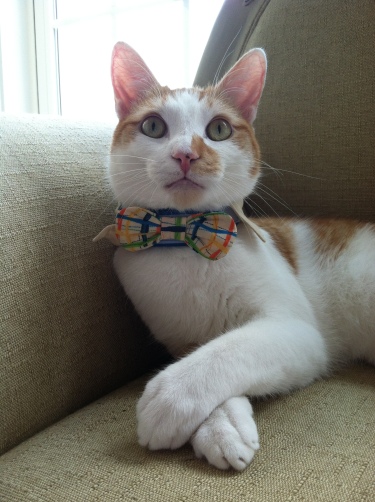 We were incredibly lucky to have our sweet kitty returned to us- not all animals are as fortunate as Django was. But our perseverance and determination were a large part of the reason he was able to come home. In the five and a half weeks that Django was missing, we only took one day off from searching. We approached the problem from many different angles, and ensured that we did absolutely everything we possibly could to make sure people knew that we were looking for him. It is a dangerous misconception that a lost pet will always find its way home. The stats on a lost indoor cat returning home without any intervention from the owner are about 2%. It is also potentially misleading to operate under the assumption that lost cats will always be hiding close by. Django was found over two miles away from our apartment, and had to cross multiple four lane roads and the Dulles toll road on his journey. To anyone else who is suffering through the disappearance of a pet: don’t give up. Your determination will be the best chance your pet has of coming home. 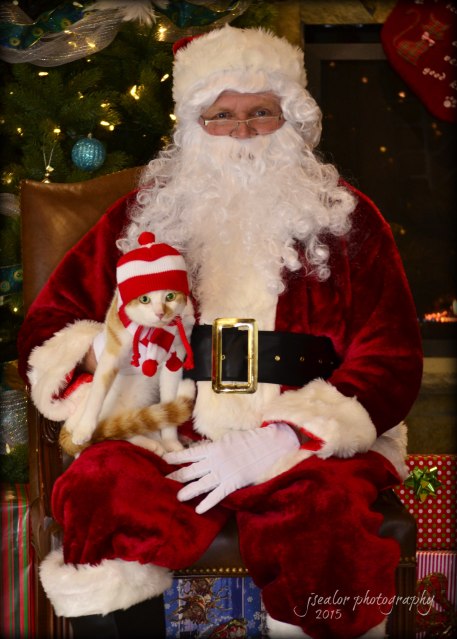 After Django’s ordeal this fall, he was more than happy to spend a few minutes with our Santa Paws this December.

Paw your way to a certain topic by searching below:

Websites to Wag About